Consumer sentiment has weakened as inflation is resulting in higher prices for goods and services. Still, with an improving labor market and environment where consumers’ balance sheets are in good shape following federal stimulus, spending trends have remained strong. JPMorgan’s Chase credit and debit card data show spending through 11/24 is up 13.8% compared to last year and discretionary spending (excluding food) increased further compared to October. 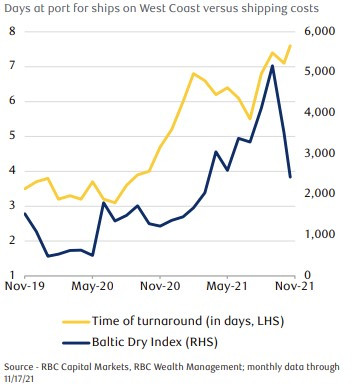 The Baltic Dry Index, which measures changes in the cost of transporting various raw materials, is showing cost pressures for shipping have eased to a 5-month low. While this could be a result of improving supply chains, there is still a large hurdle in terms of turnaround times for ships to unload at West Coast ports. This is in part due to challenges in finding truckers to take the goods out of the ports, which could mean less inventories for the upcoming holiday season.

The Omicron variant will undoubtedly capture the market’s attention in the coming weeks and months, as the Delta variant did, while facts get sorted out on Omicron’s ability to spread, how the existing vaccines may help, and ultimately how severe the symptoms may be. Investors will be focused on what has the potential to derail the economic recovery. A flare up from this variant that results in additional lockdowns, weakening labor markets, or significant changes in consumer behaviors (i.e. less consumer spending), would be detrimental to the bull market in stocks. So far, it’s too early to determine if that will be the case. Beyond virus trends, inflation and politics will be on-going considerations for the markets as well. In Washington, the decision to raise the debt-ceiling, which was delayed back in October to December 15th, is approaching and the passage of the $2T Build Back Better bill before year-end is still in question. Meanwhile, inflation data is still showing upward pressures. But until the data implies that higher prices won’t be relieved once supply chain and bottleneck issues begin to normalize or inflation hits levels that would make the Federal Reserve reduce stimulus and raise rates quicker than expected, the markets may remain insulated from inflation induced volatility. On that note, Fed Chairman Jerome Powell indicated on November 30th that inflation risks have risen and the central bank may need to consider tapering its asset purchases (Quantitative Easing) more quickly. This rattled markets, but the Fed may still lean on Omicron uncertainty as a reason to avoid tightening policy at a faster pace. Other economic data has continued to be broadly positive with labor markets, service sector, and manufacturing sector activity all posting strong results in October. We believe this should continue barring any severely negative news on Omicron. So far, leaders around the world have mostly opted against lockdown measures that would slow economic activity, but we will be monitoring the developments closely.